Miriam P. Brenner Children’s Museum’s mission is to engage all children and families in hands-on, fun learning experiences which contribute to their growth and development through play, creation, outdoor exploration, and STEM experiences.

Today, more than 400 children’s museums throughout the United States break the rules of traditional institutions by encouraging visitors to touch, talk, have fun, and learn. In a children’s museum, the audience is most important, not the objects. The exhibits, however, are catalysts for questions, exploration, and discovery and the entire experience is a playground for the mind.

Designed to inspire hands-on learning through play, the Miriam P. Brenner Children’s Museum (MBCM) offers a fun, energetic, and safe environment for children of all ages. Located in downtown Greensboro, children, their families, and teachers can interact with more than 20 exhibits including the 30-foot-tall Neptune XXL Climbers and half-acre learning garden, which are each designed to stimulate children’s imaginations and provide educational play experiences. 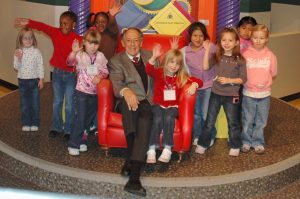 The Miriam P. Brenner Children’s Museum began with one man’s dream of bringing a children’s museum to Greensboro. Jerry Hyman was inspired by traveling to children’s museums around the country, and he began to share his vision with community leaders. Cynthia Doyle, a local legend in the area of civic duty and volunteerism, who in turn contacted a group of alumni from the Leadership Greensboro Program. This group served as the Steering Committee, then launched a Capital Campaign led by Doyle. Three years later, on May 15, 1999, the Greensboro Children’s Museum opened its doors at 220 N. Church Street. 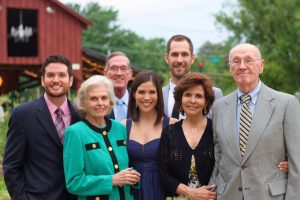 In September 2009, Food Activist and Chef Alice Waters came to Greensboro to open The Edible Schoolyard at the Miriam P. Brenner Children’s Museum. The Edible Schoolyard is a hands-on, half-acre organic teaching garden and kitchen classroom. Since its grand opening in May 2010, The Edible Schoolyard has been a destination for children, families, and teachers to learn about growing, cooking, and sharing fresh, delicious food. With an ecosystem of plants and animals, the garden features vegetables, herbs, fruits, flowers, trees, and shrubs, as well as chickens, worms, and insects. A special thank you to The Edible Schoolyard donors for their generous contributions.

In 2015, MBCM launched the “Reaching Greater Heights” expansion project and capital campaign with the objective of opening multiple signature features to strengthen MBCM’s mission. Phase 1 was completed in summer 2017 with the addition of the Outdoor Play Plaza; and phase 2, an indoor, interactive water exhibit, was completed in fall 2018. Phase 3 of construction was completed in 2020, adding the technology exhibit, The Growing Place, to the Museum’s list of fun STEAM-based activities.

Raised by parents who were very committed to community service, I can honestly say I love working with boards and committees. I am a true nonprofit geek with a career focused on youth development and leadership organizations. I am a native of Greensboro with an undergraduate degree from UNC-CH and a graduate degree from ASU. I am a Tarheel through and through much to the dismay of my NC State grad husband. Things that make my heart pound are gardening, UNC basketball, a great sale on shoes and of course my husband Jim!

Education and The Edible Schoolyard Director

I came to Greensboro from my home state of Ohio by way of UNC – Chapel Hill where I received my Masters of Public Administration. I transitioned from working in economic development in the areas of business retention and entrepreneurship to my current role as the Director of The Edible Schoolyard and Education at MBCM. I love seeing first-hand how inspired kids are while working in the garden or in cooking classes. When I’m away from the Museum, you’ll find me cooking, playing with my two young children, and enjoying three out of four of the seasons.

As a mother of two children, I have enjoyed visiting and playing in the Museum for many years. In my role, I get to bring the excitement of learning through play to many more children and families in our community. I am typically busy at work helping to celebrate kids’ special days or raising funds to ensure everyone has access to the Museum’s offerings.

Like Whitney, I believe that children are our future. Creating equitable & accessible educational experiences is a life mission; so working at MBCM is a dream come true! I have lived in every state on the West Coast and am therefore qualified to say it is empirically the ‘Best Coast’. When not trying to meet new people to be friends with, you can find me toiling in a kitchen, running in a street, or in the Cook-Out drive-thru line over-ordering.

I am a life-long North Carolinian and a lover of numbers. I enjoy being outdoors, doing yoga, traveling, and spending time with my dogs Truman and Niles.

I joined the Museum staff in 2018 to oversee the physical condition of all aspects of the Museum in order to help promote entertaining, inspiring, and stimulating experiences for families. The smiles on the children’s faces as their imaginations take them to different worlds makes it all worthwhile. When I’m not at the Museum, I operate a craftsman business and spend most of my leisure time doing outdoor activities, cooking, and trying to keep up with my new rescue puppy.

Despite growing up in the concrete jungle that is New York, I always loved spending time with animals and in the wilderness. So, you can imagine how thankful I am to have found my way to working in the gardens here at MBCM! I am a former STEM teacher who has taught in Elementary schools for well over 10 years. I hold a bachelor’s degree in nutrition and a master’s in childhood education. When I’m not here at the Museum, I’m usually camping, cooking, tending my garden, or spending time with my daughter. I’m fairly friendly and don’t (usually) bite, so if you see me out in the gardens, feel free to come say hi!

As an early learning educator, I’m able to combine my two favorite things: the museum experience and kiddos! The opportunity to excite and encourage inquisitive minds is as fulfilling as it is continuous. I am so thrilled to be a part of such an important and steadfast staple of the community. The Miriam P. Brenner Children’s Museum welcomed me with open arms from Lynchburg, Virginia, where community resources for learning and exploration are similarly celebrated. When not at the museum, I can be found enjoy Greensboro’s plethora of parks, illustrating, or surfing Pinterest.

Everything you see that’s communication-based within and about the Museum is my role! I try to bring an extra level of excitement that draws your family into the educational fun that is the Museum. Although I am a northerner at heart, I have a soft spot for the south after receiving my bachelor’s and master’s degrees in communication studies at The University of North Carolina at Greensboro. When I’m not at work, I am usually found reading a book, writing poetry or short stories, and spending time with friends and family. P.S. Follow us on social media – you won’t regret it!

There is not much to know about little old me, but just for fun I’ll go ahead and name just three.

I hail from Boston and call it my home, but one day decided I just wanted to roam.

So I packed up my things and headed out west, and ended up in a place that was truly the best.

Colorado was huge with breathtaking views and the snow was so fluffy but I just couldn’t choose.

Yes it was beautiful but boy was it cold, and I thought to myself, “When did I get this old?”.

I headed down south and found a nice spot, somewhere I could soak in some sun but not get too hot.

North Carolina is the place for me, it’s where I’ve settled and where I’ll be.

I hope you learned a little or maybe a lot, but what else can I say that’s all I’ve got.

I return to my hometown to share a deep love for growing food in community. As a Garden Educator, I align my work and Masters in Environmental Education with my experience in various farm/garden spaces. I love connecting horticulture with joyful and playful learning so that we can collectively grow our gratitude for the places, plants, and animals that give us life. Outside of work, I love to go on adventures where you’ll find myself and friends fully embracing the wonder and magic of our amazing world.

Born in Greensboro and raised in High Point, I played in the museum as a child. Since then, I have developed a deep appreciation for serving my community. I graduated from North Carolina A&T State University, where I studied Journalism and Mass Communication. My hobbies include football, music, and over-analyzing movie plots.

Originally from the DMV, I found my way to Greensboro chasing sunnier scenery. I graduated from Mount St Mary’s University, where I studied public relations and psychology. I am the youngest of 9 children and an auntie of 18, thus fostering my love for children, leading me to work at a children’s museum in Maryland while in undergrad and later as an inclusion aide for special needs children. In my spare time I am a part time plant mom, published poet, movie connoisseur, random fact collector, and foodie that loves reading, hiking, and dancing. I’m excited to be apart of the MBCM family helping children develop core memories learning through play.

2023 MBCM Board of Directors

In honor of Cynthia E. Doyle, creative visionary, volunteer extraordinaire, community activist and dedicated leader in the city’s efforts to build promising futures for our families and their children.

The Miriam P. Brenner Children’s Museum is a testament to the unfailing generosity & the community spirit of Joseph McKinley Bryan, Sr. He has enlivened the lives of our children and we are forever grateful!